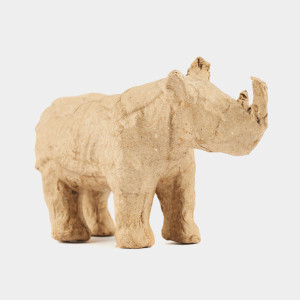 Paper soaked in any kind of paste should not be recycled, because these contaminants are impossible to remove during the recycling process.

Eco-Friendly Paint for Your Paper Mache

Some craft companies are making products from natural ingredients in order to help customers be healthier and more environmentally conscious. The flour and water paste used in most paper mache is eco-friendly. So are paints made from natural ingredients, such as water, milk, starch and vegetable dyes. The company Natural Earth Paint makes different kinds of non-toxic, eco-friendly paint for children’s crafts.

The History of Paper Mache

Paper mache, or papier-mâché, literally means “chewed paper.” Experts believe it originated in China as far back as 200 BC, where early forms of paper were already being made. The Chinese used paper mache to make functional items such as helmets and snuff boxes. Ancient Egyptians used paper mache to make death masks. Much later, in 18th-century Europe, paper mache was used both functionally and for decorative purposes, to make vases, tea trays, dolls, and to modify the appearance of ceilings, walls and furniture.